Built with Readymag, the Strelka Institute’s website for its new research program draws inspiration from graphics used by the Soviet space program.

Background: The Strelka Institute for Media, Architecture and Design in Moscow presented its new research program, The Terraforming. It is run as an interdisciplinary, urban design think-tank addressing the issues of transforming cities, technologies and Earth’s ecosystems to ensure the continuation of life on our planet. The term terraforming usually refers to transforming the ecosystems of other planets or moons to make them capable of supporting Earth-like life, but the ecological consequences of the Anthropocene suggest that we will need to terraform Earth itself. Strelka’s team created the new program’s identity and the desktop and mobile sites featuring the program’s presentation and application form for future researchers.

Design core: “According to the brief, The Terraforming’s identity had to be visually associated with the Soviet space program, combining its powerful effect and elements of Soviet aesthetics,” says Nastya Vishnyakova. “When I started looking for references, I realized that it was hardly possible to find the required images online, so I went to the Cosmos Pavilion at the Exhibition of Achievements of National Economy in Moscow, where I got inspired by the scale of the Soviet space program.”

“Among the references were images of orbits and trajectories of rockets and satellites in scientific and academic magazines,” says Vishnyakova. “These images formed the backbone of our visual design that was later completed with a grid, Strelka’s signature design element. The grid is also reminiscent of a celestial map’s coordinate grid system. A bright color palette is quite cosmic and associated with sci-fi. The Suisse font by Swiss Typefaces studio was also chosen for a reason. NASA’s 1976 Graphic Standards Manual, which was one of our references, features Helvetica and a typical Swiss grid, so we decided that modern Helvetica was spot-on.”

Challenges: “We faced a challenge when we started working on the mobile version of the landing page,” says Daria Luchinina. “If we'd chosen to follow the same design as with the desktop, it would take forever to scroll down the page. By using Readymag tools that allowed us to break text into sections and info points, we managed to reduce its volume. If you click on the bullet point, a segment of text will drop down with information about a specific component.”

Navigation structure: “When we started working on the website, we went for a single-page design,” says Luchinina. “While we knew we would have plenty of content for a fully-fledged, multiple-page website—a description of the program, the application process, curriculum and faculty—we still managed to place all of it on a single page. To help navigate different blocks, we used different background colors that change as you scroll down the page.”

Technology: “We used Readymag because it offers a practical toolbox that enabled us to build a website fast, without the help of developers,” says Luchinina. “At the same time, it enabled us to integrate more complex elements: for example, 3-D animation, which we used at The Terraforming site.” 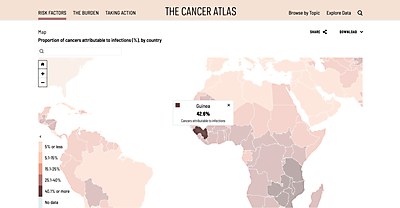 Webpicks / Health
The Cancer Atlas
In the interest of making a heavy topic accessible for a global, healthier populace, Language Dept. and Atlantic57 created a digital platform for the American Cancer Society’s Cancer Atlas. 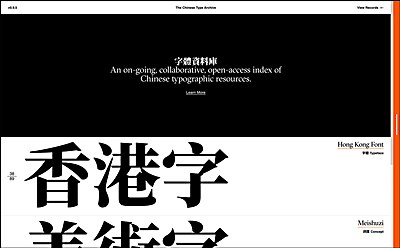