This fun exploration game by Resn encourages players to explore facts about the culture, geography and natural history of Aotearoa/New Zealand.

Background: iSpy is a hidden picture game that connects kids to the diverse landscapes, cultures and lifestyles of Aotearoa New Zealand. It is aimed primarily at children aged five to nine, but we designed it to have wide crossover appeal. Through explorative play, kids will develop their curiosity and knowledge as they discover different regions and communities in Aotearoa. It was made for TVNZ's children's destination HeiHei and funded by New Zealand on Air.

Design core: At its heart, i-Spy is a fun exploration game inspired by the wimmelbilderbuch genre (a German word that means “teeming picture book.”) We worked with renowned Wellington artist T Wei, whose unique signature style is full of personality and humor. The experience features six different environments teeming with thousands of characters, objects, plants and animals.

New lessons: When beginning any new project, we typically devote a period of time to technological exploration and discovery. Usually, this R&D is all about exploring the tech; however, with i-Spy, we also undertook careful cultural and geographical research. We wanted to ensure we presented a vision of Aotearoa New Zealand that was diverse and well-rounded. We also wanted iSpy to be educational, so we included fun facts about each of Aotearoa New Zealand’s environments. We uncovered interesting, surprising and informative facts to ensure that everyone learns something. For example, did you know that Aotearoa New Zealand’s extinct moa were the only known birds that did not have wings? We had no idea!

Navigation structure: We wanted the game to have the nostalgic feel of a traditional kiwi road trip, so we took design cues from classic New Zealand signage and created an intuitive UI system that uses postcards as its central theme. We know kids are often using mobile devices like phones and tablets, so our entire navigation structure had to be mobile-first while still being playable on desktop. All the interactions and navigation had to be easy and intuitive across all platforms, so we limited these to ones that kids are already familiar with: simple touch, click and drag interactions.

We also had two different play modes: Freeplay Mode is easy-going and is especially suited for younger players. Challenge Mode, where players have to beat the clock, was designed with more experienced players in mind. To hold our players’ attention, we included plenty of little details and Easter eggs. We also optimized the canvas size and image density to find the right balance between challenge and reward for our young players.

Technology: The frontend was built using HTML, CSS, JavaScript and WebGL. We developed a single adaptive build for both mobile and desktop devices. The objects in each scene were laid out in a Photoshop document on individual layers. Then, we used a flattened version of this as the image the player views to find the objects. When a player selects an object, a highlight-sprite overlay is placed at the location of the object, indicating to the player that they have found it.

Webpicks / Art/Design
Special—Offer
To achieve the vibrant colors on its site, this design firm hacked graphic processing units to use colors never before seen on the web. 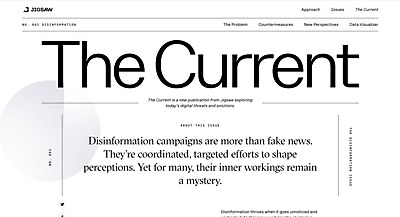 Webpicks / Technology
The Current
Designed by Upperquad, Jigsaw’s online publication takes a look at the problems facing the Internet today.